One of the greatest things I have come to know/be reminded of over the past few months is that try as I might, I can never fully know what the community might or might not know. I can share all kinds of information and miss the one thing that everyone wants to know. For that reason, I'll be doing Q&As periodically as questions come in.

If you have a question, please email me at feedback@michaelwhitehouse.org. While I may take questions from other mediums, the only way I can be sure I won't misplace your question is if you email it.

Now, on with the questions:

You have characterized former vendors, patrons, staff, and presenters who have come out against the myriad ills wrought by Jeff Mach, senior staff, repeat performers/presenters, et al. as being an "Internet Mob" intent to tear down Jeff's life works and as enemies of "the community." Do you still believe that in light of the new COGS event?
First please allow me to apologize for any part that I may have had in making it seem like we were considering you or anyone else with concerns or allegations to be enemies of the community. As I mention in this post, SPS did an absolutely atrocious job of PR, and certain individuals raised the bar on awful communication, so it is reasonable that you may have gotten this impression, but it was certainly not the message I wanted to send.

I did then and still do today believe that there was a small group of agitators who were seeking to take advantage of the situation for their own ends. I have no reason to suspect the motivations of any of the actual authors of any of the accusations. At no time, either then or now did I ever believe that any of the accusers made their statements for any reason other than to tell their story and protect others.

When I refer to enemies of the community, I refer to people who, even after Jeff was pushed out of the company and removed from the process to the extent possible, continued to attack our organization and the event we were trying to run, ultimately succeeding in bringing it down. Their stated objective of removing Jeff Mach from the event and preventing him from receiving profits was achieved in the last week of January, but they were not satisfied until they saw it all burned down.

In future articles, I will discuss some of those individuals in particular and their particular actions.

Why did you choose to believe Jeff Mach and not the victims?
I'm glad that this question was asked. For anyone who has read the the leaked log of the staff chat, you will see that at no time did I say that I did not believe the accusers. My operating assumption was that the accusations were true as written. The fact of the matter was that we were dealing with something very serious. We effectively had in our hands the choice of whether or not we should take away a man's life, livelihood, and life's work based on what was before us, so it was not a question of whether or not I believed what I read but whether what I read justified the destruction of a man's career, reputation, livelihood, and business: a much more complex question.

If you were in a low-level role, how are you so sure that the statements you've made about how the company was being run prior to your ascension to power are true?
This initial series on Wicked Faire is based on my personal experience. That is also why my story starts on January 23rd, while, clearly, the the seeds of this crisis were planted many years prior.

As for future articles in which I will discuss past issues that I was not directly involved in, all of the information I have is from conversations with a great variety of individuals who had knowledge of the situation. In places where I am uncertain or accounts differ, I will certainly attempt to indicate so.

Why were you chosen or why did you step up as the background leader of this group, while placing someone else as the public figurehead of the "new" leadership?
I encourage everyone to read the entirety of all of the various chat logs that make up the story of the crisis. We are quite blessed that this is such a record of all that happened. I will be working on posting an un-cut version of the logs when I have a moment, because there are some key portions missing from the leaked logs.

All of us stepped up as necessary to keep the event running. although I had never had leadership in JME beyond our small department, I did have experience with other leading events, and I was the only one with that experience. For that reason, there are some occasions in which I lead the conversation. At no time during that process did I have any kind of formal authority.

Why are you writing these articles?
The story of the fall of Jeff Mach Events is long, complex and convoluted. The particular sexual allegations are merely the symptom of a much greater systemic failure, and there are tremendous lessons to be learned from a deep understanding of that system. Many other organizations, in business, fandom, and non-profit, suffer from some of the same failings that JME succumbed to. Perhaps the stories that I'll be sharing over the next few weeks may help another organization to step back from the cliff that JME went over.

Why did you insist that Elise share personal information of the accusers?
I didn't. Below is the actual chat log of that portion of the conversation. 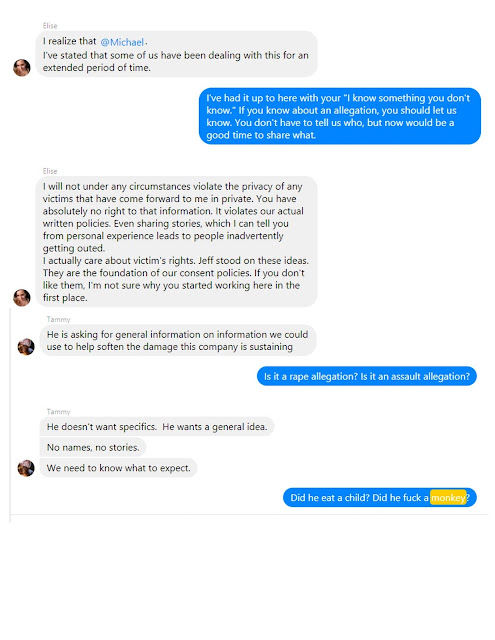 Email ThisBlogThis!Share to TwitterShare to FacebookShare to Pinterest
Labels: The Fall of Jeff Mach Events