Will Your Vote Count on the Budget Referendum? 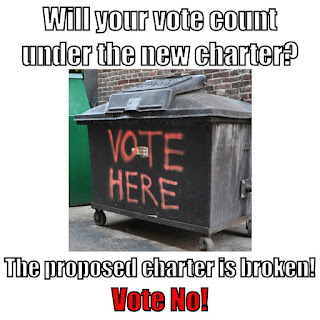 In a recent article, I discussed some fundamental and serious flaws with the proposed charter for Groton, CT. Today, I'm going to explain how the referendum in the new charter does not actually give voters any control over the budget and can and will be completely ignored.

9.12.6.6 Interim Budget and Fixing the Tax Rate In case a Budget is not approved by June 30, the budget submitted by the Town Council per Section 9.10.3 shall be utilized as an interim budget until a new Budget is approved by referendum. Within three (3) business days after an interim budget is approved goes in to effect, the Town Council will set a mill rate that shall be sufficient, with the income from other sources, to meet the estimated expenses of the Town for the next fiscal year.

So there's an interim budget. That's a good solution to the budget chaos that neighboring towns have, right?

Well, yes, it does prevent budget chaos, but it also removes the teeth from the referendum. Let's look at an example.

Since the budget referendum must be held every two weeks after the initial vote fails, 9.12.6.6 effectively says that there can be up to three referendums before the interim budget takes effect.

The initial budget that the Town Council wanted is now in effect. Why would they ever put forth another budget for vote that was lower? If no budget ever passes, the $45,000,000 sticks, and the Town Council has all the power to determine what gets voted on.

The following year, there's no reason for the Council to mess around. They'll just put forward the budget they want in the first place, and it doesn't matter if it passes or fails because after three votes it goes into effect anyway.

Of course, this exercise in fake democracy costs taxpayers about $100,000 every year, or $400,000 over the course of a Town Council's four year term. That's the same amount it cost to get the Fitch Community Center up and running. That's a lot of money to waste to pretend the public can influence the budget.


Ultimately, the check of the RTM and it's reduction of 1-2% every year from the budget is gone. The Board of Finance is powerless. The referendum is easily ignored. In any system with no checks and balances in place, the natural result is budgets slowly but inexorably growing.

Whatever this new charter was intended to do, it doesn't do it. The people of Groton trade away their representation through the RTM for a vote in a referendum that ultimately doesn't matter. It doesn't matter if you like big government or small government, lower taxes or more services, there is no possible agenda you could have that is served by this poorly written and deeply flawed charter.

The only reasonable vote on the proposed Groton charter is NO.
Posted by Michael Whitehouse at 5:04 PM