The Groton Charter Revision In Brief 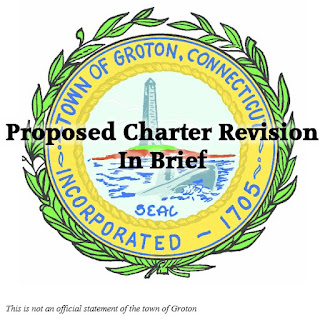 On November 6th, Groton, Connecticut will vote on a proposed revision to the Charter which governs the structure of the town.

Presently, Groton has a 9 member Town Council and a 41 member (1 per 1000 residents) Representative Town Meeting. The Town Council is the seat of primary authority in the town. They have the power to create ordinances, develop the budget, and make contracts with employees among other powers.

The Representative Town Meeting reviews the budget line by line, approving or reducing the Town Council's proposal. They can also restore funding if the Council cut the Town Manager's or Board of Education's recommendations. The RTM has the power to veto ordinances of the Town Council and even the Power of Initiative to create their own.

It is effectively a bicameral legislature, with the Town Council as the upper house and the RTM as the lower house, with diminutive authority but providing a check on the power of the Town Council.

Groton's Right to Vote is the political action committee advocating for this revision, and you can find a summary of their arguments on their web site.

What's Changing
The main thing that the charter revision will do is eliminate the RTM and create a Finance Board and budget referendum. Rather than the Town Council creating a budget to be reviewed by the RTM, the Finance Board will work with the Town Manager to create a budget recommendation. The Town Council will then take that recommendation and craft the actual budget. This budget will then be voted on in a referendum.

The GRTV web site summarizes this as follows:

What's not Changing
That might sound pretty good to some, but is it really?
All that sounds pretty good, doesn't it. I mean, who doesn't want the "right to vote?"

It's a little more complicated than that. In future articles, I'll be going into great depth on a number of these topics, but let's just spend a few moments on each of these points.

The Right to Vote
They do indeed have budget referendums in many other towns, most of them smaller than Groton, and if you speak to people who live in those towns, you will find that most of them are quite disappointed with the results of this system. A town official from a local town explained that about ten years ago, there was a wave of charter revisions replacing town meetings with referendums, and almost without exception, the towns that have undergone such transitions regret their choice to do so. The election process creates uncertainty and unnecessary expense in the municipal governance process. Recently Sprague, a town of 2,900 people (compared to Groton's 41,000), took four months to pass a budget. North Stonington once took 9 votes to finally approve a budget. In small towns, a budget referendum only costs a few thousand dollars. In Groton, each vote will cost $20,000-$25,000

Massachusetts, which has town property taxes on average 1/3 what they are in Connecticut, has a town meeting in every town, but a referendum for any tax increase of more than 2.5%. This is called a Prop 2 1/2 Override. Thus, they are able to have an efficient and representative system of budget creation with a check against excessive tax increases. To many, this would seem to be a more reasonable, less costly form of a budget referendum for Groton to adopt, rather than the extreme version being proposed.

Greatly simplifies Town Government by eliminating the RTM
Simple government is not necessarily better government. The RTM provides an opportunity for ordinary citizens to participate in the government process. Whether a town has a council or board of selectmen, the close involvement of the town leadership with the day to day workings of the government can induce a form of groupthink, sometimes causing them to overlook obvious solutions or problems that an outsider might spot at once. The RTM is a simple and effective solution to this problem, allowing 41 engaged citizens to take a second look at all the major activities of the town.

Eliminating the RTM makes town government simpler and smaller in one way, but our government is intentionally built on a system of checks and balances. The President requires Senate approval for appointments. Congress must get a Presidential signature to pass a bill. The Judiciary may review the actions of either. In the same way, the RTM provides a check and review on the actions of the Town Council. Take away the RTM, and 5 members of the Town Council (a simple majority) have a lot more power with no check or balance.

Board of Finance and Transparent Annual Budget Process
An argument of GRTV is that the early part of the budget process is behind closed doors, led by department heads, and that by the time the budget reaches the Town Council and the RTM, much of it is already set. The GRTV supporters argue that the new charter will create public hearings earlier in the process as the Board of Finance has meetings to create the budget. However, the truth is members of the public can speak to the Town Council and RTM anytime, all year long, and the Council holds a public hearing on the budget before the budget process begins. It’s not so clear anything the BOF does will be different.  Furthermore, the BOF in Groton has no actual power or authority. They are “advisory” only. Groton will be the only town in the state with a BOF with no actual power or authority. In every other town that has a BOF, they have actual power.

But, all three bodies, the Council, BOE and RTM can control overall employee costs (80% of the budget) by reducing positions, which has been done over the past two decades.  Many positions have been eliminated. Again, nothing will change in this regard, with the new charter. The claim that the RTM can’t act on 80% of the budget is inaccurate.

Virtually no change to the core of our town government
It is a bold statement to suggest that the elimination of a 41 member elected representative body constitutes "virtually no change to the core of our town government." The RTM not only reviews the budget, but reviews ordinances, financial transfers, and other town activities. Beyond the official powers of the RTM, the RTM creates a method for 41 additional members of the community to be involved in their town's government, and to provide oversight of every activity of the town. That's 41 more sets of eyes to notice potential cost savings. 41 more people to spot errors or even malfeasance. 41 more people keeping an eye on the cookie
jar. Many of these people become interested enough to go further and later run for Town Council or Board of Education. We lose the valuable learning opportunity for residents who want to be involved but cannot necessarily commit to weekly meetings all year long.

In the next few weeks leading up to the November 6th vote, I will be writing a series of articles to provide additional background and information on various aspects of the proposed revision.

You see, I came to this issue at first with not particular interest one way or the other, but the more I researched and studied, the more I found that our current system of government, while not perfect (what system is?), has an incredible elegance in its system of checks and balances. I have found the proposed charter revision to be unrefined, unfinished, and undesirable for the future of our town, and I believe that as I share what I have learned with you, you will come to agree with me that this revision should be rejected.

Groton's charter is not perfect, and revisions may be needed, but this revision, the one before us in November, is not the right choice for Groton.