Before going on, please read this article from Foxnews.com discussing allegations against Tom Brokaw.

OK, hopefully you read it.

Pop quiz. Is Tom Brokaw accused of "exposing himself to one woman while the two were in his office and asked her to touch him" or having "sex in the middle of the day in his office?"

If you answered yes to either, then you've made my point. If you had to go back and check the article, ditto.

It's no secret that Fox News would like to discredit more traditional news outlets like NBC, and a good way to do that would be to discredit news icons like Peter Jennings or Tom Brokaw.

Here we have the allegations about Tom Brokaw behaving inappropriately, and given the nature of his position over the women he is accused of being inappropriate with, these are very serious allegations. However, it would appear that Fox did not feel they were serious enough. What to do?

Go back to the article, and you'll see that there is an article about Tom Brokaw. That article ends with this sentence, "Brokaw stepped down as an NBC news anchor in 2004." Other than a random paragraph that does not seem related which talked about Lauer in the first half, you could end the article at that point because no additional information about the story comes after it. What follows that is a rehashing of Matt Lauers much more serious and gross allegations, which does not appear to have any direct tie in to the Tom Brokaw story above. 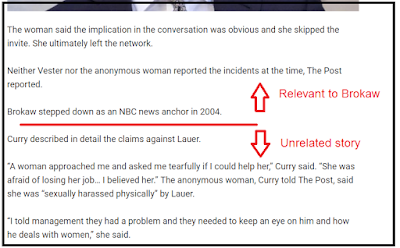 So why would they do that? Because they know how people read. Mostly they read on their phones, quickly, while multitasking and not paying attention

When I first read this article on my phone because someone had sent it to me, I had to go back and read it a second time to confirm who had sex in an office.

Four paragraphs discuss specific details without using Lauer's name, meaning that scanning the article, which is the way that many people read, could lead one to conclude that Brokaw had been the one revealing himself and having sexcapades in his office. 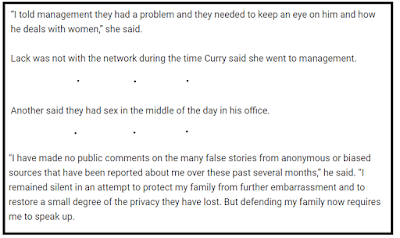 While every part of the article follows basic principles of journalistic integrity, concatenating the two unrelated stories together without explanation causes another form of deception.

One might argue that the stories are related because they are both about sexual misconduct at NBC, but it that's the case, why not mention Cosby or other celebrity abusers? Why not mention that the two sets of allegations occurred in different decades? Why not include a paragraph linking the two stories? It's on online article, it's not like there's a word-count limit.

Not all forms of deception require falsehoods. Sometimes it can be as simple as framing and presenting the truth in a different way.

According to The Washington Post, Brokaw, now 78, made unwanted moves on Linda Vester, a former NBC correspondent and former Fox News anchor, twice during the 1990s, including a move to forcibly kiss Vester, who was in her 20s at the time.

The report also detailed the claims of an anonymous woman who told the outlet Brokaw acted inappropriately toward her during her time as a production assistant in the 1990s. Brokaw was the anchor of “NBC Nightly News” at the time.

He has denied all the accusations against him.

“I met with Linda Vester on two occasions, both at her request, 23 years ago, because she wanted advice with respect to her career at NBC,” Brokaw said in a statement issued by NBC that was provided to The Post. “The meetings were brief, cordial and appropriate, and despite Linda’s allegations, I made no romantic overtures towards her, at that time or any other.”

Before the accusations against him went public, he actually spoke out about the #MeToo movement on MSNBC -- without mentioning his own behavior. “I do think we need to have a healthier, well-defined dialogue, if you will, and I’m not sure how we launch into it,” he said in December 2017.

A Fox News request for comment was not immediately returned by NBC.

Lauer’s former co-host, Ann Curry, who left amid turmoil inside the network, also said in The Post report that she told network management about complaints regarding Lauer's alleged sexual harassment, in 2012. However, NBC News Chairman Andy Lack previously said there were no formal complaints lodged against Lauer in his two decades with the network.

“I am speaking out now because NBC has failed to hire outside counsel to investigate a genuine, long-standing problem of sexual misconduct in the news division,” Vester told The Post.

Vester spoke of an alleged January 1994 incident in a New York hotel room with Brokaw. She had plans to leave New York ahead of an impending snowstorm but Brokaw discouraged her, she said, and suggested that the two get a drink.

“I only drink milk and cookies,” Vester claimed she said as a way of skirting Brokaw’s alleged intentions.

Former 'Today' co-host Katie Couric told BuzzFeed she hasn't 'reconciled' the Lauer she knows with the Lauer accused of sexual assault.Video
Katie Couric parsing truth from fiction regrading Matt Lauer
“It was the only thing I could think of at the time, hoping the reference to milk and cookies would make him realize I was 30 years his junior and not interested,” Vester said.

But when plans to travel to Washington D.C. got canceled, Vester said, Brokaw tried again in a 3 a.m. phone call to her hotel room.

“Once in my room . . . I received three phone calls,” she told The Post, citing diary entries she made at the time. “One from a friend, another from a source; the third was Tom Brokaw. He said to order milk and cookies and he was coming over.”

“My career at NBC would be over before it even got going,” Vester said she remembered thinking if she turned Brokaw down. The anchor soon knocked on her door.

“What do you want from me?” Vester claimed she asked Brokaw.

“An affair of more than passing affection,” Brokaw allegedly replied.

Brokaw urged Vester to sit next to him on the sofa, she claimed. He proceeded to press “his index finger to my lips and said, ‘This is our compact,’” The Post said she wrote in her diary.

Brokaw then allegedly placed his hand on the back of her neck and grabbed her head in order to “show” Vester “how to give a real kiss.”

"I could smell alcohol on his breath, but he was totally sober," Vester told Variety in a detailed account of the alleged interaction. "He spoke clearly. He was in control of his faculties."

Vester said she forcefully wiggled away from Brokaw in reply.

Following a brief silence, Brokaw decided to leave, Vester claimed. “I think I should go,” she said he said.

A similar incident between Brokaw and Vester took place over a year later in London, Vester claimed, but she again avoided Brokaw’s advances.

A second woman, who once served as a production assistant at NBC News, claimed Brokaw encountered her in a hallway in the mid-1990s and encouraged her to meet him on the side of the walkway. Brokaw then allegedly held her hands, spoke of how cold they were, and proceeded to place them under his jacket.

“He put my hands under his jacket and against his chest and pulled me in so close and asked me, ‘How is your job search going?’” she told The Post. After replying, Brokaw allegedly suggested the woman “come into my office after the show and let’s talk about it.”

Conflicting accounts over fired anchor
The woman said the implication in the conversation was obvious and she skipped the invite. She ultimately left the network.

Neither Vester nor the anonymous woman reported the incidents at the time, The Post reported.

Brokaw stepped down as an NBC news anchor in 2004.

Curry described in detail the claims against Lauer.

“A woman approached me and asked me tearfully if I could help her,” Curry said. “She was afraid of losing her job… I believed her.” The anonymous woman, Curry told The Post, said she was “sexually harassed physically” by Lauer.

“I told management they had a problem and they needed to keep an eye on him and how he deals with women,” she said.

Lack was not with the network during the time Curry said she went to management.

In interviews with The Post, 12 NBC employees claimed to have been sexually harassed by Lauer, who was fired in November 2017.

Lauer exposed himself to one woman while the two were in his office and asked her to touch him, an anonymous woman told The Post.

Another said they had sex in the middle of the day in his office.

Lauer, who has remained mostly mum following the allegations last year, provided a forceful response to The Post.

“I have made no public comments on the many false stories from anonymous or biased sources that have been reported about me over these past several months,” he said. “I remained silent in an attempt to protect my family from further embarrassment and to restore a small degree of the privacy they have lost. But defending my family now requires me to speak up.

“I fully acknowledge that I acted inappropriately as a husband, father and principal at NBC,” he continued. “However I want to make it perfectly clear that any allegations or reports of coercive, aggressive or abusive actions on my part, at any time, are absolutely false.”
Posted by Michael Whitehouse at 6:00 AM