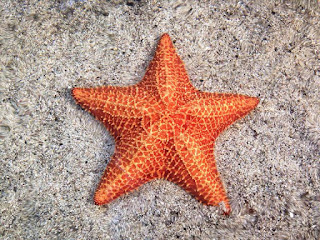 One day, a boy was walking along a beach that was littered with thousands of starfish that had been washed ashore by a storm. As he walked he came upon a man  who was throwing the starfish back into the ocean, one by one.

Puzzled, the boy looked at the man and asked what he was doing. Without looking up from his task, the man simply replied, “I’m saving these starfish.”

The boy chuckled aloud, “Son, there are thousands of starfish and only one of you. What difference can you make?”

The man picked up a starfish, gently tossed it into the water and turning to the boy, said, “I made a difference to that one!”


Last night I got a message from someone I meet four years ago. She was working at an ice cream shop at the time, and, getting ice cream one day, I talked with her as I often do with people I meet. Turns out that she was just finishing high school and was getting interested in anime and conventions but didn't know where to start. At the time, I was running the Connecticon Info Desk Department, and I invited her to join my team and get to see the con from the center of it all.

We became friends and speak occasionally. Last night, she sent me a message in which she realized that when we met, she was just finishing high school, and now she has just graduated college. She said this:

"It seemed like such a small encounter, but your kindness to some random kid behind the counter stayed with me. You listened to me as i spouted off whatever high school angst I had and genuinely gave me advice and your time. Now I'm 22 and thinking about how incredible that was. You are the only stranger to ever be that kind to me."


Throughout our daily travels, rushing here and there, doing this and that, we brush up against so many other lives. I didn't think twice about chatting with the person behind the counter. It comes naturally, but it made a difference to her. Everyday, we have dozens of opportunities to make someone's life better, if only in a small way, but that small thing could mean everything to the right person at the right time.

Probably without intention, her words came to me at a time when they had great impact. The past half year has been very difficult for me. I have been in a place where I had to wonder who were truly my friends and who were not. I came to doubt myself and my contributions to the world.

This message (as well as many others I have received recently) was a powerful reminder that I have left a lot of good behind me, and that I have much more good to do.

I have seen so many people step forward both behind and in front of the scenes to be the light in the world. Some did so because they were brave. Some because they didn't know what they were getting into. But all of them because they saw what the right thing to do was, and they knew that it was their time to do it.

I started this year with about 1,675 friends on Facebook, and in the past six months, I have removed and blocked a considerable number of toxic people from that list. Today, after all of this, my list of friends stands at 1,701. I am deeply grateful for all the wonderful people I have been blessed to meet, both this year and before.